Let’s talk about extension, flexion, their relationship to your hip flexors and ways to strengthen them using yoga poses. To reiterate from a previous post on “Yoga Butt and Low Back Pain“, I mentioned that sitting for a really “long-ass” time can affect the way that your whole body operates. Well before this corporate life of sitting at our desk for hours to work on deadlines in order to put food on the table, we weren’t sitting for that long. Our bodies weren’t designed to do that and they still aren’t!

We were designed to move. Many moons ago, you’d have to hunt and gather. In order to get to school, you’d have to walk for miles. In addition, you’d have to wash your clothes by hand. To build a roof over your head, you’d have to squat down and pick up the tools (manual not power). You really had to survive. That included lots of extension and flexion in addition to several other essential movements.

The Modern World Makes it Easier For Us

Now, there are things in place so we no longer require many of these survival skills. For example, we have chairs so we can sit in an elevated position all the time. Instead of walking far distances, we have cars and public transportation. To take it a step further, if we don’t want to drive somewhere to pick up necessities, we have dozens of smartphone apps to them delivered to our door instead. To summarize, there’s all these things that make life so much more easier for us.

The ease and comfort of having these tasks handled by technology comes at a price. Sitting for a “long-ass” time can get your butt pretty numb. It can shorten your hip flexors and lengthen your gluteal muscles. In the long run, this may not be great because it can affect the angle of your pelvic tilt. This, in turn, can affect how your lower back operates. For example, it can begin to take over the work of your glutes that have fallen asleep. The act of sitting for awhile can change your whole posture!

In an attempt to be helpful yoga teachers, many have placed quite an emphasis on stretching hip flexors in their sequencing. This is because many students report feeling tightness from sitting so much. Unfortunately, the passive stretching can only alleviate the discomfort temporarily before the pain usually returns. Stretching is actually the opposite of what we could be doing to ease the discomfort for the long run. 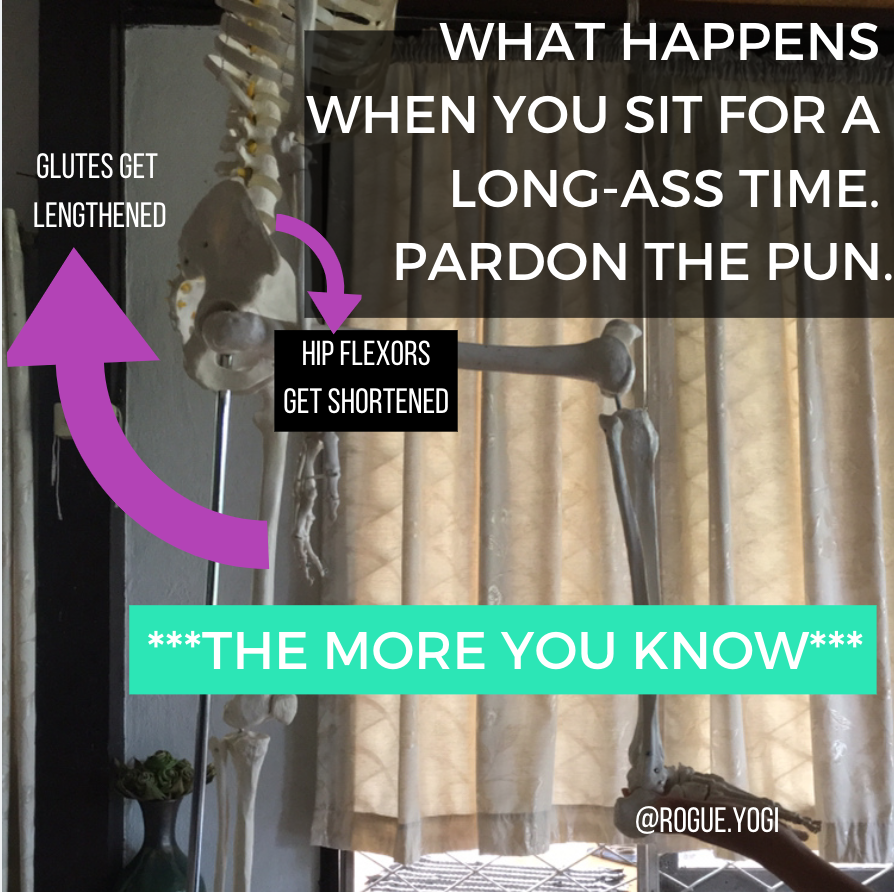 Before I get into what “extension” and “flexion is”, we will take this time to look at the anatomy of hip flexors. What are some yoga poses doing to stretch them? What does that look like and how can you recognize the movements?

Get to Know Your Thigh and Hip Flexors

Let’s direct your attention to the thigh.

Notice how it connects up to the hips. The group of muscles here are called “hip flexors”. They literally bring your hips into Flexion. If you look at your own body and draw a line on your head horizontally from ear to ear. Everything parallel to that line is your “Coronal Plane”.

According to Wikipedia, “Flexion describes a bending movement that decreases the angle between a segment and its proximal segment.[9] For example, bending the elbow, or clenching a hand into a fist, are examples of flexion. When sitting down, the knees are flexed. When a joint can move forward and backward, such as the neck and trunk, flexion refers to movement in the anterior direction.[10] Flexion of the shoulder or hip refers to movement of the arm or leg forward.[11]

Extension is the opposite of flexion, describing a straightening movement that increases the angle between body parts.[12] When a joint can move forward and backward, such as the neck and trunk, extension refers to movement in the posterior direction.[10] For example, when standing up, the knees are extended. Extension of the hip or shoulder moves the arm or leg backward.[11] When the chin is against the chest, the head is flexed, and the trunk is flexed when a person leans forward. [10]” 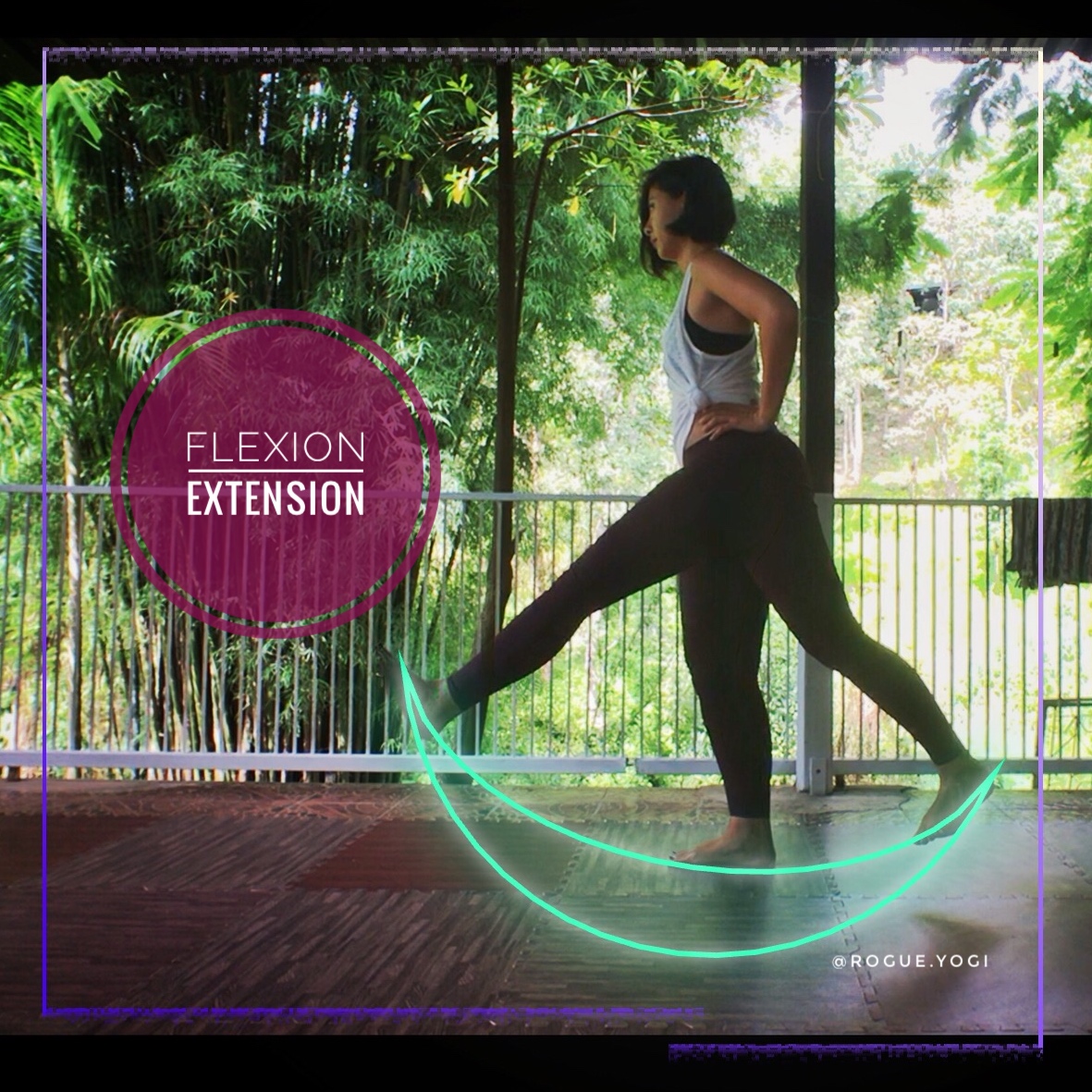 You might start thinking about some yoga poses that emphasize these two types of bodily motion. There’s poses like low lunges and high lunges that place your front leg in flexion (and your rear leg in extension). Some teachers might encourage you to lunge deeper to feel the stretch in extension. Additionally, other teachers push you to lunge deeper due to a perceived idea that going deeper in your end range of motion is equivalent to attaining a deeper level of yogic enlightenment.

Sidenote: If you’re feeling some kind of aches and pains, stretching may alleviate this temporarily, but it usually doesn’t help in the long run. While this is kind of a difficult topic to talk about because there’s hyper flexible and non-flexible people who feel good from doing the stretches, it’s important to point out that this approach can be counter intuitive. Instead, you really have to strengthen your hip flexors. This is the way to respect the signals that your body is giving you. Signals that tell you that your nervous system doesn’t like this motion. As your protector and guardian, it’s trying to prevent you from going deeper by tightening up. 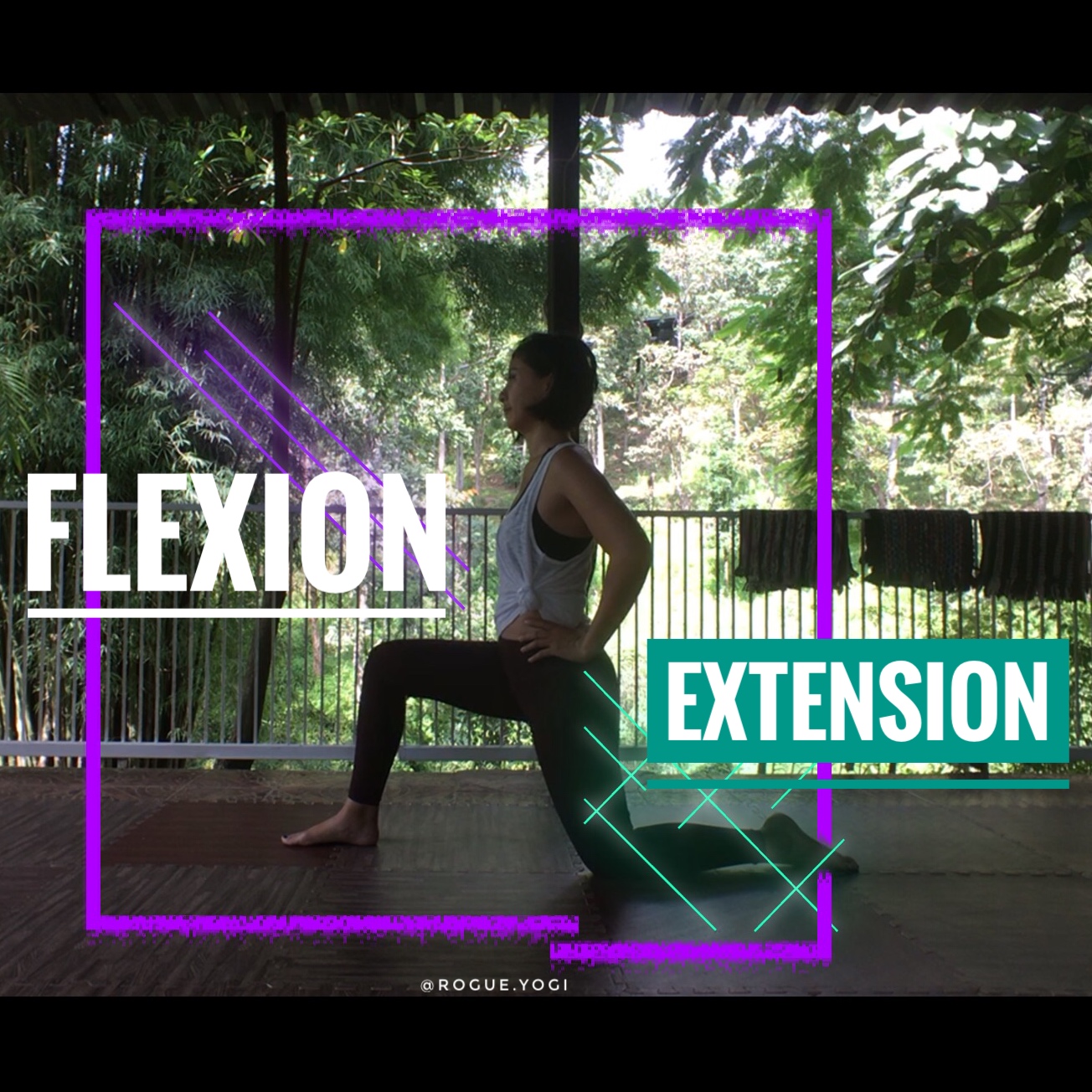 There’s quite a bit of exercises I can recommend. However, I’ll write about them in another blog post. In the meantime, let’s see these anatomical movements of flexion and extension in more action.

Let me show some other body parts that do flexion and extension. Take a look at your knees. When you raise your left knee in front of you, it is in flexion. Then, when you lower your left foot down or bring it back and up, your knee is also behind you in extension. 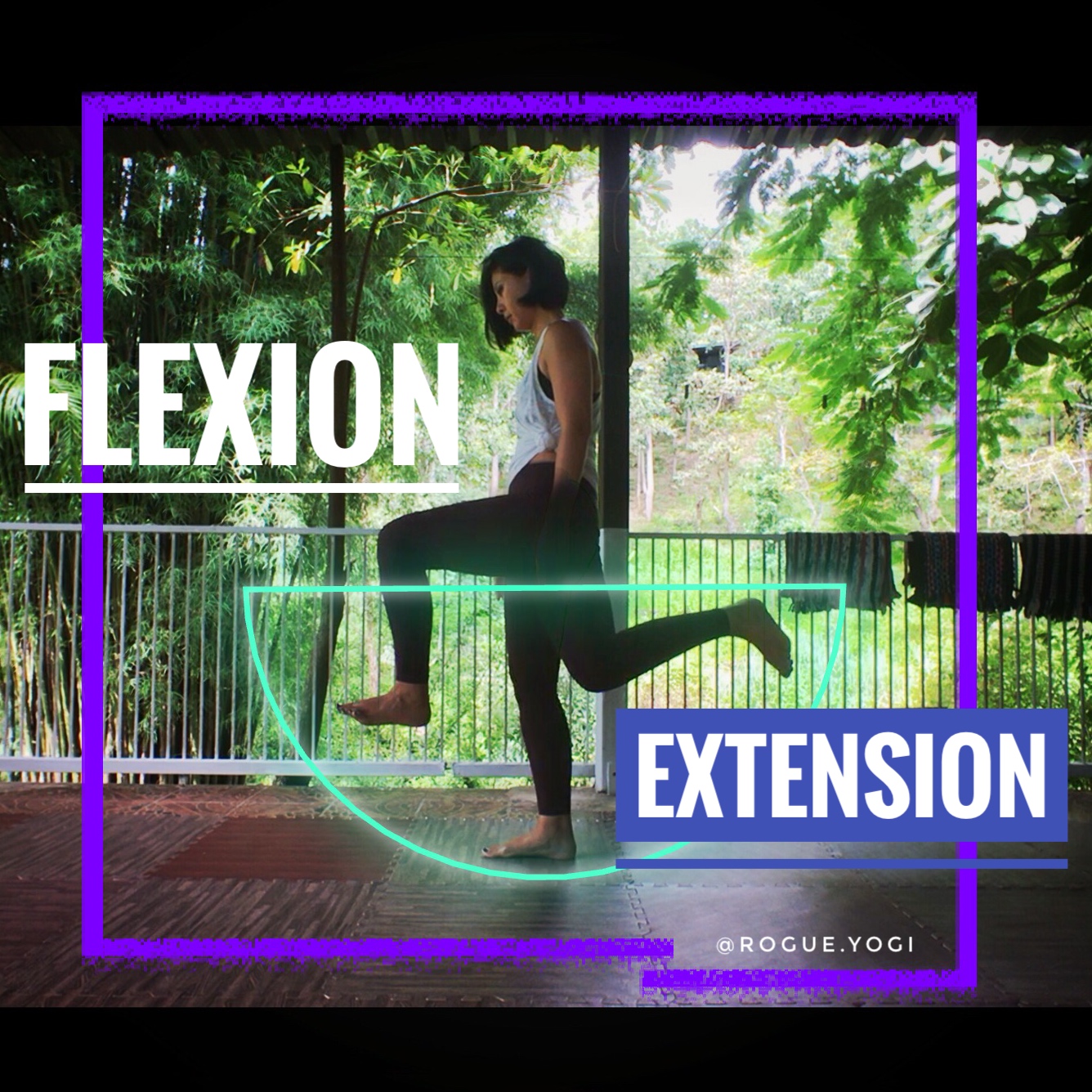 To wrap it all up, I’ve explained to you what “yoga butt” is or “dead butt syndrome” and how sitting for a long-ass time can be less helpful to your everyday life. As you read this, think of how many “traditional” yoga pose cues there are that can contribute to glute weakening and butts falling asleep if you don’t balance out the flexibility with mobility and stability.

In “short”: Sitting encourages your body to remain in a fixed position for a period of time. Once you begin to recognize these directions that your limbs are held in, you can consider balancing it out by supplementing movements that go the other way, supplementing strengthening exercises and using the passive stretch as more of a “cherry on top” or a way to decompress from the sitting before adding in the aforementioned.

As a side note: there are more ways that your body parts move.  Your forearms and feet can “supinate” and “pronate”. Your legs and arms can “abduct” and “adduct”. These all are relative to “planes” which are describing the relationship of movement to the surface area of your body, what part of your body is moving and what part it’s moving away. I’ll go “deeper” into these topics during another blog.

PS. If these blog posts and videos are helping deepen your practice in a healthier way, consider treating us out to a Golden Turmeric Milk Latte using the button below. It helps us keep Rogue Yogi going so we can continue to provide more science-based education to complement the spiritual. This info allows everyone to focus on the other limbs of yoga without wrecking their bodies as much.

Was this content helpful? Buy us a Golden Turmeric Milk Latte!